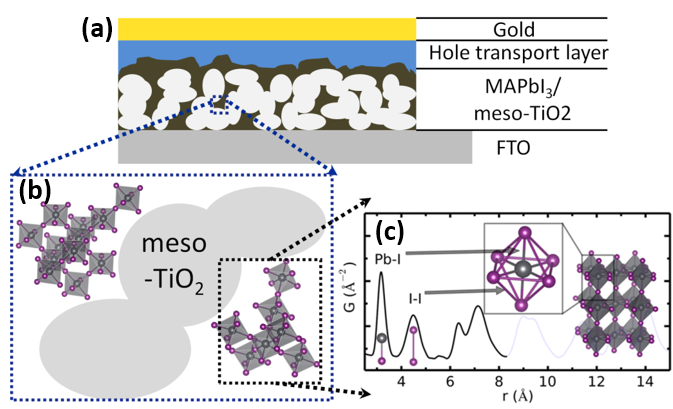 For solar electricity to be economically competitive with fossil fuel based electricity, the cost of fabricating and installing solar cells needs to be much lower. Solution processed solar cells can potentially achieve this with a drastically lower fabrication cost but their low performance has so far limited their success. Recently, solar cells based on methylammonium lead iodide (MAPbI3) perovskites have burst on to the stage looking set to revolutionize the field of solution processed solar cells – only after 4 years since the first solar cell report in 2009, greater than 15% power conversion efficiency has been achieved. A full understanding of these devices requires an atomic level understanding of the optically active material. However, this is a major challenge because the active metal-organic perovskite is nanostructured and integrated into a mesoporous network of titania where the majority of the material present is the matrix oxide. It is notoriously difficult to determine the structure of nanomaterials in general, which are not amenable to crystallographic methods, but even more so when they are minority phases in a heterogeneous complex as in this case. In this collaborative work between Billinge and Owen research groups at Columbia University, the first fully quantitative structural characterization of mesoporous titania supported MAPbI3 using atomic pair distribution function (PDF) analysis of high energy X-ray diffraction data is reported. Strikingly, in contrastto conventional wisdom that high efficiency solar cell materials are typically highly crystalline, the PDF analysis reveals a two component nanostructure: one component with medium range crystalline order (30 atomic %) and another with only local structural coherence (70 atomic %). The nanostructuring correlates with a blue-shift of the absorption onset and increases the photoluminescence. These findings suggest that disordered and amorphous phases, which are not visible in conventional XRD measurements, are likely important to solar cell device efficiency, a factor that will depend on the processing method. They underscore the importance of fully characterizing and controlling the crystallinity in these devices. The manuscript was published in the November 22, 2013, online edition of the Nano Letters (http://pubs.acs.org/doi/abs/10.1021/nl403514x).