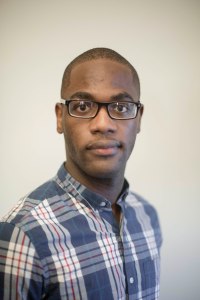 Neno Fuller graduated from Brooklyn College of the City University of New York (CUNY) in 2015 with a B.S. in physics and a minor in mathematics. In 2013, Neno worked with Nancy Griffeth, comparing different computational models of the Ras-protein mediated cell-signaling pathway, to develop and test therapies targeting mutations that affect this pathway. Starting in 2014, he was a Louis Stokes Alliance for Minority Participation scholar in the laboratory of Mim Nakarmi, where he grew and analyzed thin-film hexagonal boron nitride by means of chemical vapor depositions and atomic-force microscopy for photonic applications. Also in 2014, Neno participated in an REU in Andrew Houck’s group in Princeton University’s Department of Electrical Engineering. He used a high-frequency structure simulator to model a filter device for use in quantum computing. Neno’s senior thesis with Karl Sandeman focused on magneto-caloric materials for use in magnetic refrigeration. In Simon Billinge’s group in the Department of Applied Physics and Applied Mathematics, Neno now seeks to elucidate subtle phase-transition properties in potassium-doped barium-iron-arsenide and thereby better understand the properties of iron-based superconductors. Neno plans to purse a Ph.D. in applied physics.